We all have seen steam coming out of factory chimneys, and smoke stacks from e.g. laundries or food processing plants (and yes, potatoes are peeled with steam..).

What many people do not realise is, how much energy the steam actually contains. It takes an energy of 300 kJ to heat one litre of water from 20 to 100°C / 212F, but 2256 kJ to evaporate it. Now, what does that mean in real terms? Well, if we have a volume of 100 litres of steam (half a bath tub) escaping per second, then we see thermal or heat energy of 226 kW being wasted. If we could only recover 10% of it (and more is very difficult, see “The Carnot Limit”), then we would have 23 kW of electricity, which is enough for 40 to 45 houses.

We all know the pictures of large solar thermal plants with mirrors focusing the solar energy into one point, where temperatures of 500°C / 900F or more are generated. All this is very futuristic and fancy, but also very expensive. Too expensive, some people say. 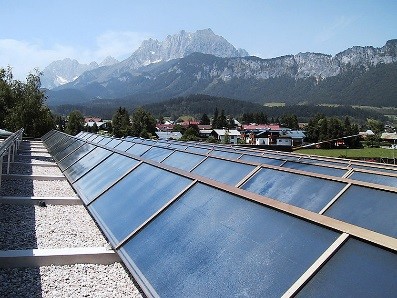 The cheapest way to collect solar energy is the flat plate collector, shown in the picture, which is a insulated box with a (double-) glass cover and a heat absorber inside. Modern flat plate collectors can reach operating temperatures of 120°C / 390F with 50% efficiency. The problem so far was, that it is very difficult to actually use this energy since the temperature is so low. Our Condensing Engine could do exactly that.

In many industries, waste heat is generated. A lot of it is in the temperature range between 70 and 150°C / 160 to 300F, which cannot be used because there is no cost-effective heat engine. For us, this is an interesting but possibly slightly removed option compared with waste steam and solar thermal energy since industrial waste heat is often difficult to recover. Often, heat exchangers need to be employed, or the heat is generated in parts of processes which are difficult to access.

Again interesting, but not easy. We have heard of the problems with geothermal energy in or near cities, where earthquakes were caused by such installations. In addition, steam generated by geothermal energy is often loaded with corrosive substances. Something for the next stage, when the Condensing Engine is already working in practice.

Why are we developing this machine?

well, it has an operating temperature of only 100 degrees centigrade, which makes it suitable to use waste steam, industrial waste heat and heat e.g. from solar thermal collectors

Of course we are interested in discussing the technology, its potential etc. with other people. We will try to get a Blog going, and see how that develops

Description of Davey’s Engine from 1885 added under “History”